The Secret to Happy Group Photos

Today I thought it would be good to talk about the one part of a wedding few people enjoy. Yes, you’ve guessed it – Group Photos.

Let’s face it, you’ve probably been to a wedding or two where you’ve found yourselves roped into endless formal photos which seem to take over the entire reception. Being forced to line up, stop talking and smile on command is such a buzz-kill, of course you’d rather be catching up with friends over a nice glass of fizz.

It’s a real shame when group photos become a chore, especially as these pictures should bring back happy memories rather than remind you of all the canapes you missed out on. But don’t panic… group photos can be done quickly and they can even be fun!  Here’s my top tips on how to keep them quick and simple.

Remember why you booked your photographer in the first place. Was it for their formal, posed pictures or was it for their natural, documentary style? If you’ve booked me to shoot your wedding it’s probably because you value natural, authentic moments over staged, traditional photos, so you’ll get the best results by keeping your group list fairly short and sweet.

I’m fully aware that sometimes you simply can’t avoid a long group list for various reasons. If this is you I’d highly recommend booking a Second Shooter to get the best of both worlds.

If you’d like a healthy dose of family photos on your wedding day, it’s really important to create time for them in your itinerary. Group shots often require a good chunk of time to do properly, so you’ll want to factor in at least 30 minutes for a list of 10-12 different set ups.

Seems like a long time doesn’t it? But when you break it down, that’s roughly 2-3 minutes per photo, so it’s actually pretty quick. Most of this time is usually spent persuading guests to come and join in, rather than the actual photo-taking, which is why I recommend designating someone to help gather people up (see section below).

Don’t be fooled into thinking an hour is plenty of time for your drinks reception. This part of the day passes in the blink of an eye, so if you’re keen to get a good mix of family photos as well as some beautiful natural shots, couple photos and details, you’ll want at least 1.5 hours to get the best from your photography.

I can’t emphasise this one enough. While your wedding photographer can help to an extent, your group photos will run far more smoothly if you have a few nominated ‘helpers’ to gather people up.

In all likelihood your guests will be dotted all over the place, so it’s incredibly handy to have a few ushers or family members get them moving while your photographer sets up the initial shots. It’s so much easier when guests can step in and out of photos like clockwork.

If you’re not sure who to pick don’t worry, we’ll talk it over when we catch up for your pre-wedding meeting.

Choosing your group photos is a very personal decision and it’s not always an easy one. Do you want dedicated pictures with extended family or would you prefer more focus on your immediate families?  What about shots with friends? Could you include everyone in one big group photo instead of having multiple setups?

One size simply doesn’t fit all, so while I generally suggest couples aim for a maximum of 10-12 group photos I know this isn’t always possible.

Start by prioritising your ‘must have’ photos and take it from there. We’ll look at your list together at your pre-wedding meeting when I’ll be happy to offer some suggestions.

TOO MANY GROUPS? DO SOME IN THE EVENING

If your list has gotten way too long but you can’t see a way out of it, it might work to divide them up. We could do your family and bridal party photos during the drinks reception, and then more informal shots with friends in the evening.

If it’s important to you to have a shot individually with your mum/dad/siblings sometimes it’s possible to do these before your ceremony if times allows.

If you’ve got young children in your group photo list, it’s important to be realistic about what they’ll be able to do. Even the most confident kids can find weddings a bit overwhelming, and might struggle to stay still for formal photos.

We’ll definitely try to get some where they’re looking at the camera, but if it’s not working out try to see the funny side and embrace whatever chaos unfolds. If we don’t manage to get them in the group shots I will do my best to capture some natural shots of them instead later on.

I’ll normally ask you if there’s any children involved and will do my best to get photos with kids done first, so they don’t get bored and have more time to play.

It could be having one big group photo is the perfect solution if you’d like to have all your guests in at least one photo, but don’t want to spend hours on multiple shots.

For this to work it’s important your venue has some height or shaded steps available to your photographer as it’s not always possible to photograph large groups at eye-level.  I’m always happy to climb a ladder if there’s no elevated viewpoint, just check your venue has one spare.

If this idea appeals try to fit it in with a time when your guests are naturally grouped together so you don’t break up the party, usually I’ll do this just before the wedding breakfast or immediately after the ceremony ends.

It might seem tempting to wing your group shots, but there’s nothing more disappointing than getting your photos back and realising you forgot to take one with somebody really important to you. This is why I insist on making a written list with names so I know who’s who when it’s time for group shots.

Once you’ve decided on your group list and who your helpers are, make sure your families know exactly what to expect. Tell them that you’d like them to be part of the photos and ask them to stay nearby while these are going on.

Equally, if you’re not having many group photos or have opted for none at all, make sure your families are aware of this to avoid any confusion.

Group photos don’t have to be formal! Hopefully we’ll make your group photos so easy that you’ll have a laugh in between takes, and we’ll come away with some awesome photos to show for it.  Keep smiling and carry on! 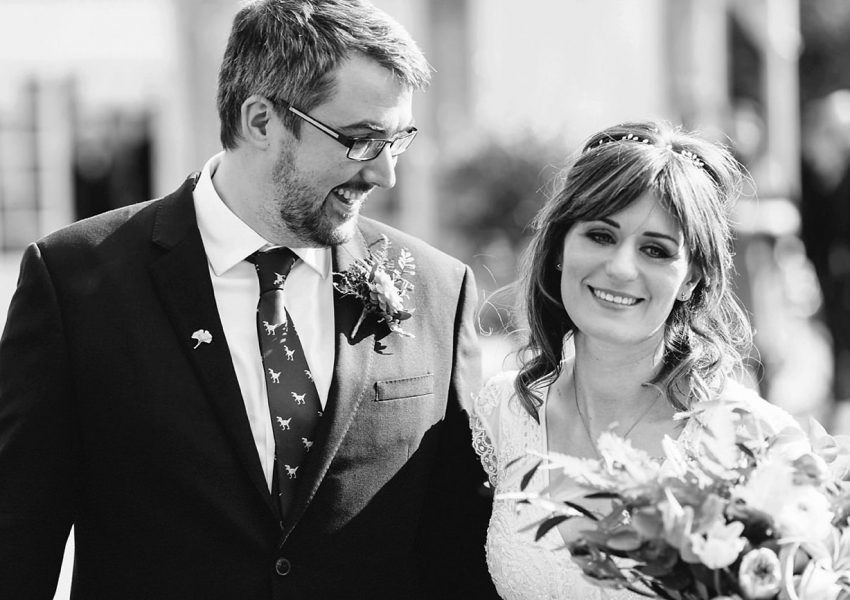 Reflecting on our own wedding photos…

If you’d asked me three months ago what we were doing for our first wedding anniversary, I’d have said that we were planning a trip away over the Easter break, a nice meal out in the same village as our venue, and that I’d secretly ordered a wedding album as a surprise gift for Jon ... END_OF_DOCUMENT_TOKEN_TO_BE_REPLACED